Our campaigns in a nutshell 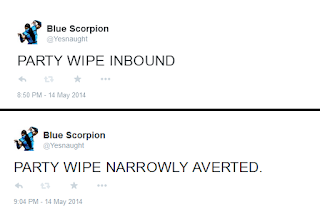 This was originally about Rise of the Runelords, but it's an ongoing theme in our games.

Posted by Wisconsin York at 01:07 No comments:

Email ThisBlogThis!Share to TwitterShare to FacebookShare to Pinterest
Labels: Shitposting

Fix is a legally non-extant Agent for an agency that doesn't exist named Delta Green, one of many such phantoms defending the world against things that shouldn't exist.

I shouldn't document any of this. I might not be one of their proper Agents, but even I can guess that it's against the rules. I'm sure Agents have killed and been killed for less. But I need to get it out of my head.

At work, I go by the name Fix. Everything else is need-to-know, and nobody needs to know. I'm a mechanic and handyman in general; of late, I've been called to fix things that aren't normally within my wheelhouse.

This last case started with a cold call. Duty's on the other end, and I'm to meet a team in New York, at Central Park for a night at the opera. For some reason, we're asked to have vipers / snake emblems visible to identify other Agents.

We arrive, in order:

Lacking a snake emblem or stencil at short notice, I simply ask if either of them own the Dodge Viper about to be towed.

Our leader, Emily, quickly briefs us: Cell J, based locally, was doing some sort of investigation when they went missing. We have to find out what happened to them.

We head to their last-known location, which has a police perimeter around a large tent in a car park.

Jacobs takes the lead and gets inside the perimeter with his "crash analyist", myself.

We take a look under the tent; it's a stereotypical "pay no attention" black SUV with tinted windows. It certainly looks like it's seen better days from the outside, and on the inside is around 4 Agents' worth of blood coating the inside.

I clear my throat. This is *clearly* a rare case where the shock of an impact has just travelled straight through the car and straight into the people inside, like a newton's cradle. (But quietly, yeah -- definitely not natural.)

Jacobs frisks the car and finds a revolutionary data storage device; a mini-disc. Somehow the police forensics team missed it.

Outside, we tell the cops the SUV's definitely going to have to be towed to the lab for further analysis. (Read: We're going to take the car and destroy it with fire.)

Meanwhile, the rest of the team hits up a pawn shop which had a security camera looking outside. With the aid of Benjamin Franklin, Zark acquires the tape.

We meet at the Green Box where we stash the car for now; needing something to watch the pawn shop and MD on, we find a cheap hotel that has a VCR, rent a room, and watch away while Jacobs finds a Radioshack.

The tape is heavily degraded due to re-use, but we can see a man in dark clothes carry coffees past the camera in the dead of night, headed for the SUV -- clearly a member of Cell J. Moments later, he's sprinting as fast as he can the other way -- presumably he found the car and what was left of his team. He was running towards an intersection, so the cams there should have a better picture.

Jacobs returns with a MD player. An interesting video is within; footage from a camera in the SUV, watching some goth-looking people posing on rocks in Central Park. Directing them is some asian woman.

Jacobs, full of surprises, identifies her as Susan Xcho, pop choreographer. What she'd be doing in the park is a mystery.

We chase up our leads... or try to, anyway. With a bit of work, we get into the traffic cams and forensics that the police took.

The cameras are apparently useless; they never catch the running man at all, which means he somehow vanished within 4m of sidewalk with no trace, and nowhere to go... except up. It's safe to guess he's dead.

The cops had a similar surprising lack of evidence; despite the blood of three agents somehow coating the inside of the SUV, there was no other biological material. No gibs, no meat.

We destroy the evidence on the case anyway, just to be sure, and torch the car in a bad neighborhood before calling it quits.

We obviously haven't hit the end of the mystery, but that's not part of our job description, and while we might not be official military, the golden rule still applies: "Never Volunteer". We've done what we came here to do, even if there's nothing left but bloodstains to bury.
Posted by Wisconsin York at 05:22 No comments:

Archivist's note: This letter has been damaged in places by damp.

Upon finishing investigation of the house in the woods and dropping the baby off,
The medallion that we're finding on cultists depicts a cross between an eel, a fish and an octopus.

Ronan goes off to "Polish his sword". Boys will, apparently, be boys. Later, I find he has sort of broken into the Mayor's house, and discovered that the Mayor has actually been kidnapped.

We canvas the town for more information. In doing so, Hecathia manages to insult the Mayor's name to one of his neighbors.

Croon came with us back to the house, but somewhere along the way, he found a portal and fell through it, we lost him briefly.

Following him, we found ourselves in a cave system; Croon suspects he has set off an alarm with his arrival.

Hecathia found a pool of water that she spent some time sniffing to try and determine if it was saline.

We find a flight of stairs down, and find ourselves in a room with two exits. A golden, rune-inscribed bell in one corner, and in the other corner, a glass tank that contains a perfectly-preserved man... a familiar face: The founder of Ilmarsh, Cassius Undiomede?!

The bell has holy symbols on it.

Lucia judiciously smashes the glass tank, releasing a corpse, glass, and a flood of water and formaldehyde I feel it was superfluous. If the Founder was in suspended animation or something, he isn't now.

Ronan finds a diary and skims it. It's not terribly interesting, apparently.

There's nothing else special in the room, so we move on, exiting near the bell.

In the next room, the floor has pools of brackish water, and scattered across the room are several victims of great violence, literal Scum. There's about half a dozen Scum left alive, gathered around a shark-hybrid who appears to be Leader Material. They're conversing amongst themselves, but we can't make it out and frankly don't want to.

We back up and go the other way through the tank room. In the next room is a series of natural terraces, and a pond filled with various fungi, growths, algaes and water scum. The room reeks of rot.

Lucia decides to wade into the pond to look for treasure; she finds a helmet and amulet, but as she turns around, the algae and scum comes to life...

Ronan shoots an acid ray at it, and I sprint forward, shouting "Look out, Lucia!" as I perform a splendid forward-dodge roll over a knotty tentacle. It responds by shaking snowy spores into the air.

I flank it properly and figure out it's some sort of plant-based creature. Ronan gets huge and advances. Lucia throws her loot to the shore and spins around and absolutely tears into it before getting slapped and groped by the plant thing. I brand it for retribution, and Ronan finishes it off.

The helmet is a Helm of Underwater Action - Lucia borrows it to go diving for more crap in the pond.

In the next room are what looks like dressmaker's dummies... but on closer inspection, they're just dessicated torsos on sticks. I clutch the frog globe just a little tighter.

Magically, the room is filled with an aurora borealis. There's a pit nearby where a singing comes from. We open that pit up, and there's a young woman in the pit. Her hair is a yellow-white. Hecathia calls out to her, and her skin is deathly pale and yellowed; her eyes are sunken, and she's clearly not well, She holds a baby, which is long since dead.

I look to the Frog Globe for guidance. Visions of a city in decline with no new life. Impossibly tall mountains consumed by a growing darkness that snuffs out the stars above, one by one... a vision of a negative level.

Lucia catches up. Hecathia's not able to do anything for the girl, so we decide to go murder those Scum to make ourselves feel better.

We sneak closer. but Ronan and Lucia bump into each other and give the game away early. I finish one and the shark-hybrid charges in and mangles me.

Things get hairy for a time, and I forget the exact sequence of events, but it ends as it ought to -- with us victorious and only gently bruised for our trouble.

Vic
Posted by Wisconsin York at 05:47 No comments: