The name's Mordecai. Mordecai Montressor. I'm fond of a precious few things; guns, fine women, and stiff drinks. When I'm not workin', I'm propping up bars of a day, and reckon I've a curse on my head; trouble seems to find me wherever I roam, and in the summer of 1815, it was no different. I was approached by the Department of War in a bar in south Carolina -- or as they've recently been renamed, Department of Justice. According to them, I've gots skills of use to the government.

With the help of a white council wizard, our party's put together by travelling through Ways. There, I meet Braxton, a convict, and bear-like lumberjack named "Caribou Bill". Accompanying them is Prospero, his apprentice Pat, a black man named Frost who is minding Braxton, a man named Phobos, and Caliban, the ugliest man I ever did meet.

We're acquainted, and set off to our destination through this thing called the "Nevernever". I don't rightly understand it, but these magic types have enough confidence that I reckon they know what they're doing, so I'll trust 'em. Wouldn't be the first time I've trusted to someone to walk me through strange lands.

It's a bizzare place, but Prospero reckons we ain't gonna run into anyone else on this trail, strange as it is. I'll take his word for it.

Along our way, we spot the biggest ice block I ever did see. One of the wizards mentions he's glad it hasn't moved. Where else could a big ol' block of ice go? He looks at me pointedly, and I take a drink. I shouldn'tve asked.

I regret askin' that question in short order. The ground shakes and big men made of ice blocks show up; Frost demonstrates that the two rifles he holds ain't just for show, and shatters one.

Just as I'm thinkin' they're easy prey, they charge in quick, and maul Propsero's apprentice good and proper. Caribou Bill's muscle ain't for show, and that axe of his is good for more than splitting wood -- he takes a good chunk out of one.

I won't be outdone, and I put three into the nearest ice giant. A voice whispers that ice giants aren't here yet. I argue these types are plenty ice and giant enough to be ice giants. My target's head shatters, and he falls over, dead.

The third leftover attacked Caliban, bein' one of the few with any courage to approach the man, I imagine. Caliban strikes back and strikes hard.

Braxton, despite all his gutsing about not wanting to be here, shows more backbone than many I've known. Punching the ice man ain't so effective, and it shows, but brave nonetheless.

The last two unoccupied icemen go for Caribou Bill. He avoids one, and takes the other to pieces.

Caliban takes his iceman and rips the skull clean off. Just as he does, the way forward is revealed, and we all make a brisk exit. The world gets a lot more normal; a nice, snow-covered forest. Which is weird, considerin' it's summer.

Prospero cares for his student, as he rightly should. As he does, Caribou points out that Prospero said we wouldn't meet anyone on the trail. Apparently icemen don't count as people, bein' constructs. I reckon he's just tryin' to weasel outta bein' wrong.

The rest of the team is looking a lot more refreshed. Apparently the place is good for
magic types. I can't feel the difference. Braxton notices and is surprised that I'm
so... normal. Hell of a thing being the odd one out, for once, now I know how a negro feels.

Prospero tells us Caliban's here to guide us through the mountains from here on -- Braxton figured that was why Caribou was here. Caribou thought this was why he was here. I didn't reckon that it was why I was here.

Caliban checks we're ready before leading us to a set of steps. Braxton makes small talk with Frost for a bit. I ask where we are -- turns out we're towards the northern end of Ohio. Nearest town's about six miles back the way we came... down and up a ravine. I guess a trip to the watering hole is out of the question.

Frost spots someone in the trees ahead; he mentions it softly, and I get Caliban's attention. He straightens up and gains a full six inches of height, speaking to the figure. He's apparently a guardian of the area, and Caliburn's had dealings with these people before, explaining how he knows his way around here.

The Guardian is clearly an injun, but he's dressed like a proper gentleman, and in this climate, to boot. He's mostly injun in blood, but I can figure there's some white man in there, too.

It's mentioned that we were bought here because of a railroad; the strange nature of the area prevents a railroad being built here. And this is caused by great spirits. Apparently Phobos knew, but figured it wasn't worth mentioning, and Prospero didn't dare opposing him.

I ask why he would let a bureucrat -- a weird one, but a bureaucrat -- push him around like that, being a wizard and magical and such. Braxton points out that this weird bureaucrat was able to just push him over.

I argue that this ain't so hard, and try to push him over. I touch him, and... well, I don't feel much like pushin' him over no more. We've got a job to do. I mop the sweat off my brow and we keep on walkin'.

Braxton remarks that I'm shaking, like it's any of his business. I say it's been a while since I had a drink, and the Guardian appears next to me, offering me a canteen. I take it, and it smells like alcohol, so good enough for me. I thank him, and he says it's only natural, I'm a guest.

He says that in a real ominous manner. Braxton, who I don't much feel like lookin' at, explains that it's a formal thing. Like regular hospitality, but... more. I shouldn't be shootin' nobody here. I reckon that kinda went without sayin'.

We arrive at the edge of the village, and it's larger than we thought, filled with people like the Guardian -- injuns dressed like white men. We're welcomed in with disturbin'ly wide arms.

I'm feeling a lot better now; the drink did me a power of good. Dunno how Braxton got inside my head like that, but it's probably some trickery; a man with trickery like that, I can see the reason he was all locked up.

Braxton remarks that this is the nicest place he's been to in years. I imagine it would be, if y'all had been in jail.

Caribou says he can hear this keenin' sound, like those ice men made. I don't recall them makin' a sound except smashin'. The Guardian seems to know what he's on about though, and says 'it' comes, whatever it is.

He's real cryptic about where it's coming from and going to, and Braxton asks if he's a wizard, too. He points, and we get a much more accurate bearing on the thing when it makes a sound that we can all hear this time.

A giant ice man appears; Braxton would like to leave, if it so pleases the Guardian. He's happy to let us out, but reckons we'd do well to stay until the fighting's done -- we're not fighting it, the village has protection. Rather, the giant of fire that hs appeared will be fighting.

This is not the first time this has happened. These two have been going at it once a week, for the last twenty years or so. He's not sure though, as time flows strange here, which I guess I could believe. The fire giant is the Great Spirit we've heard so much about, and he'd be pleased if he prevailed over the ice giant. And he reckons the great spirit could be agreeable to lettin' the railroad go unmolested if he were to win on a permanent case.

Braxton would still like to leave and go back to his little cell. Frost is also agreeable to this. Sixteen years is a long time to spend in prison. It sounds like he says "Sixty", but that's plum crazy, how can anyone expect a man to serve sixty years in prison? He'd die before he got halfway through it, I'm sure.

Braxton thinks about it, and changes his mind. The Guardian is pleased to then welcome us to dinner.

Posted by Wisconsin York at 01:09 No comments: 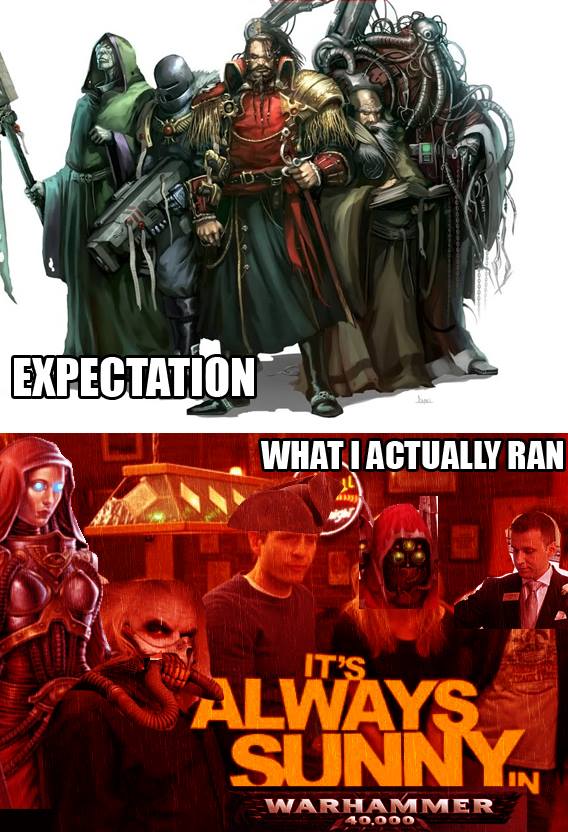 Posted by Wisconsin York at 12:22 No comments: