Rogue Trading for Fun and Profit, Episode 11: Lord-Captain Shut Up and Do Business Gaiden

Rogue Trading for Fun and Profit is bought to you by:

Lord-Captain van Hohenheim - Rogue Trader. Hero. The last of his line. That's like a unicorn!
Magos Abigail von Thannhausen - A magos who possibly takes too much pleasure in the craft of Servitors. Accompanied by her servo-skull.
Archaius Wash - A gunnery sergeant with an irritatingly low-quality accent and a poor-grade artificial voicebox.
Sebastian LaMarck - A seneschal with a silver tongue.
Winter York - Astropath Transcendant. Monstrous willpower. Your glorious narrator and remembrancer.

We start the session with a recap of what the Absolute Ambition actually looks like layout-wise: 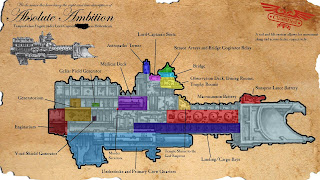 The astropath's tower, Winter's domain, is a figurative literal ivory tower, painted white; not actually made out of ivory, because that's a lotta ivory, and not made out of Ork teef, because while it would be baller as fuck, it would ultimately be temporary.

The thumping stopped; on the other side of the door are a bunch of mindless bodies. Almost like puppets with cut strings. Lizbutt is out cold. Does not take a genius to figure this out. Ky Summerton is one of them.
Winter is taken to the ICU. Ha ha. The magos is careful to not drop me en route.
As soon as we arrive, Lizbutt is taken into custody and put on a drip so she stays in that coma.
Sebastian arrives after getting the short version over comms.
Sebastian: "What happened to Winter?"
Magos: "She got iced. She had a very chilling confrontation with the psyker."

Winter is stabilized, although she's going to spend the next weeks in a tank. Sebastian, the Magos and Wash go check up on loose ends.
Marcus is fine; he's far from a vegetable, unlike the Summertons that Lizbutt had under her thrall. He's apologizing to his father, doesn't get what came over him.
Surprisingly, Lucius asks about the head of the Summertons upon hearing about them.
Lucius: "This... *gesturing at the macrocannons and their crew* my boy, we're blood. But this ship... we're family."
He offers to send crew over to help the lance battery stay functional. Soft bastard.

Unfortunately, those affected by the thralling are in a bad way; they aren't really taking food. One or two with strong wills are recovering a bit, but most are basically vegetables.
Sebastian evaluates the hydroponics lab and the Ghostfire within; he's got no idea how Lizbutt managed it, but it's viable, for now, and ludicrously valuable, if illegal. She appears to have been using it to make Spook, for her own consumption.

The ship sails ever onward to wards Scintilla, and everyone who was hearing that psychic broadcast sleeps a little easier now.
Posted by Wisconsin York at 05:09