Rogue Trader Season 3: Coming in from the Cold, Part 1

It's Always Heretical in the Kronus Expanse is bought to you by:

Lord-Captain van Hohenheim - Rogue Trader. Hero. Protein shake advocate. The last of his line, and currently searching for the one thing that obscene wealth cannot easily procure, nor his now prodigious strength wrest from the world by force: Love.
Magos Abigail von Thannhausen - A Magos Explorator-biologist, chymist, and practicing genetor, and most definitely the heart of the command staff. The Lord-Captain's wingwoman in his ongoing romantic forays.
Archaius "Boosto" Wash - A sector-renowned pilot of anything with wheels, wings, or a gellar field, and peerless swordsman. Often seen approaching the speed of sound, by virtue of his jetpack, but soon may be heralded by bombardment from a multi-melta.
Sebastian LaMarck - Rarely heard or seen, but his presence certainly felt, our Spymaster and reigning king of Human Resources and Administration. By him, every command given by the Lord-Captain is magnified.
Winter York - Astropath Transcendant. Unsurpassed willpower and aspiring champion of markswomanship, despite the obvious handicap of being blind. Three time recipient of the Death's Door award. Notorious advocate of psychic power pissing matches, more machine than woman at this point, and endowed with wings. Also your glorious narrator and remembrancer.

It's been a long time. Three years since the Dread Pearl.
Our settlement, Verloren, has grown; cities have sprung into existence, and the Lord-Captain's personal residence, Meridian Prime, has been established; it's been extensively furnished, including a round table with a slightly more prominent seat, and statues of the Lord-Captain are prominent and (somewhat) tasteful; among them, a statue of him in a thoughtful pose, a statue of him wrestling an oncoming Ork that bears a strong resemblence to Hadarak Fel (spitting sound), and a statue of him holding the world aloft, supported in turn by statues of us.
Our (the Lord-Captain's) wealth has expanded; we made full use of the bounty provided by the Dread Pearl, which has swelled the dynasty coffers, and almost as importantly, Hadarak Fel (spits) has not been heard of since -- with any luck, he didn't make it out, but knowing that weasel, he certainly did.
In terms of health, the Lord-Captain has never been better; now accustomed to his new muscles, which have been evened out by judicious use of premier vat-grown muscle, his strength is rapidly approaching the realm of legend, putting him on a truly galactic stage; by contrast, the Lord-Captain's personal life is... not quite falling apart, as that implies there is something to be salvaged, but there is definitely something left to be desired. As fantastic company the command crew is, dating options are exceptionally thin on the ground, and being the last of his line in a profession which carries no small amount of personal risk makes for some tremendous dynastic pressure to produce an heir.
To this end, the Magos, working her own family's prominent connections, is playing Wingwoman, helping to arrange suitable suitors: 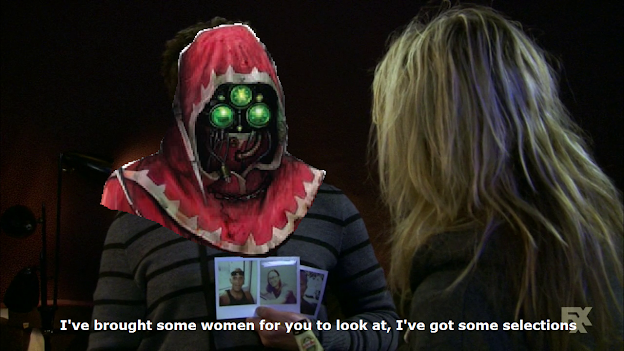